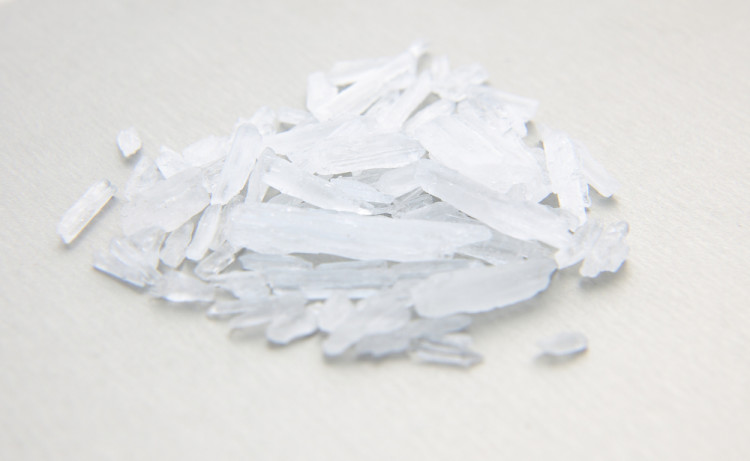 Crystal meth is a highly addictive, illegal stimulant drug that has a long-lasting euphoric effect.

Known informally as meth, ice, or glass, it resembles shiny “rocks” or fragments of glass of varying sizes. It is known more formally as crystal methamphetamine.

The drug is an odorless, colorless form of d-methamphetamine, a synthetic psychostimulant.

It is made in illegal labs in the United States (U.S.) and abroad, often by combining ingredients derived from over-the-counter (OTC) drugs with toxic substances.

The Drug Policy Alliance maintains that 11 million Americans, on at least one occasion, have tried methamphetamine.
Fast facts on crystal meth

Here are some key points about crystal meth. More detail is in the main article.

Recreational use
Crystal meth
Crystal meth is taken in many ways, and it is popular for its euphoric effect. Its street names come from its crystalline or glass-like appearance.

Crystal meth is popular among young adults at dance clubs and parties. It is taken for its euphoric effects.

Some people take it because it can lead to rapid weight loss, although most of the lost weight tends to return when a person stops using the drug.

Some people prefer crystal meth to other illicit drugs because the sense of euphoria it gives can last for up to 12 hours. This is a much longer duration than cocaine, a drug with similar effects.

People with depression may choose to take crystal meth for its mood-enhancing properties.

Others may be attracted by the increased libido and sexual pleasure often associated with this drug.
How do people take it?

Crystal meth is most commonly smoked in glass pipes, but it can also be snorted, injected, swallowed, or inserted into the anus or the urethra.
Effects: Brain

Crystal meth boosts the release and stops the reuptake of a neurotransmitter, or brain chemical, called dopamine. In this way, it increases the levels of dopamine in the body.

Dopamine plays an important role in motor function, motivation, reward, and how the brain experiences and interprets pleasure.

The dopamine “rush” in the reward centers of the brain gives the user a sense of euphoria soon after taking the drug.

According to the National Institutes on Drug Abuse (NIDA), brain imaging studies on chronic abusers of methamphetamine abusers suggests that dopamine system activity changes in such a way that it can seriously compromise a person’s verbal learning and motor skills.

Crystal meth can also severely affect the structure and function of brain areas linked to emotion and memory.

This may explain why chronic users of crystal meth often develop emotional and cognitive difficulties.

Some brain changes that occur remain long after the user has stopped taking the drug. Some may reverse after long periods of abstinence, but this could take a year or more.

Repeated use can have some psychological effects.

When taken regularly or in high doses, crystal meth can cause a condition known as methamphetamine psychosis.

A person who regularly uses crystal meth also has a high risk of becoming addicted.
Effects: Body
Crystal meth heart
Crystal meth can have a serious impact on the heart.

The drug can also lead to some physical effects.

Using the drug can lead to lowered inhibitions and behavior that puts the user in danger.

Chronic use or overdose can lead to convulsions, stroke, heart attack, and death.
Meth mouth

Regular users of crystal meth have a significant risk of losing their teeth through severe decay. This is known as meth mouth.

One reason is that methamphetamine contains acid ingredients that are bad for the teeth. Illicit products may include drain cleaner, battery acid, and hydrochloric acid.

There are other reasons for the prevalence of meth mouth among those that use crystal meth.

Crystal meth produces feelings of euphoria for up to 12 hours, and users crave its powerful effect again and again.

However, after several uses, the same dose does not have the same effect as it first did.

A person can become addicted after using crystal meth only a few times.

A tolerance develops, and users need more of the drug to achieve the same effect.

In time, the need for the “high” becomes more important than other factors in the user’s life, while use of the drug increasingly achieves only a break from withdrawal symptoms.

If a person tries to break the habit, they will experience withdrawal symptoms.

Although the person’s physical system will be free of the drug after 2 to 3 days of stopping use, psychological symptoms will continue.

This is because crystal meth, like other addictive drugs, changes the user’s brain chemistry.

The person is likely to experience emotional turmoil and strong cravings for some time.

Symptoms can last for days or weeks, depending on how long the addiction has lasted.

Drug rehabilitation programs can help people through the withdrawal process and guide them toward a drug-free life once withdrawal symptoms have gone.

There is currently no government-approved drug that can help a person recover from crystal meth addiction.

Treatment may involve cognitive behavioral therapy (CBT), exercise, and nutritional guidance and incentives, such as vouchers, in exchange for remaining drug-free.

For anyone concerned about a loved one who may have an addiction, NIDA provides information and guidance about what to do.